Mariana Yampolsky (Chicago, Illinois, 1925 – Ciudad de México, 2002) was one of the major figures in 20th-century Mexican photography, specializing in capturing photos of common people in everyday situations in the rural areas of the country …  keep on reading Wikipedia 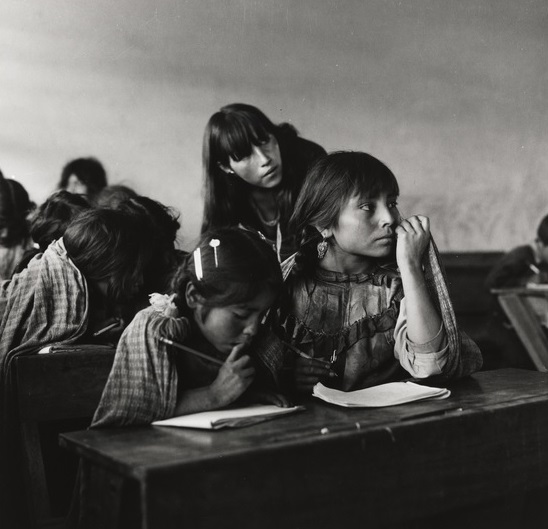 Yampolsky’s career began when she arrived to Mexico City to study painting and sculpture at the National School for Painting, Sculpture and Graphics, commonly known as La Esmeralda. She came to Mexico without knowing any Spanish, and had to communicate at first with gestures. She keep knocking on doors until she came to that of Pablo O’Higgins, who would introduce her shortly thereafter to Leopoldo Méndez.

She became a member of the Taller de Gráfica Popular (People’s Graphics Workshop) in 1945 as the only woman at the time. This was an organization dedicated to creating and promoting art with a political slant, especially anti-fascism, for the masses, founded in 1937 by Leopoldo Méndez, Pablo O’Higgins and Luis Arenal. She was a printmaker with this group until 1960 and the first member of its Executive Committee. During her time here, she met other artists of her generation including Francisco Mora, Ángel Bracho and Alberto Beltrán who encouraged helped her learn Spanish and encouraged her to draw everything she saw in Mexico, both in Mexico City and out in the other states. She was also curator, organizing exhibition in Mexico and in other countries such as Sweden, Japan, and France.Through the Taller she exhibited her printmaking work from between 1945 and 1958. Her work with this group includes images of Emiliano Zapata and Zapatista soldiers. Her work with the Taller, as well as her relationships with the other members helped her “fall in love” with Mexico, its people, its folk art its vegetation, politics and culture. She learned to dance many of the folk dances of the country. (Wikipedia)