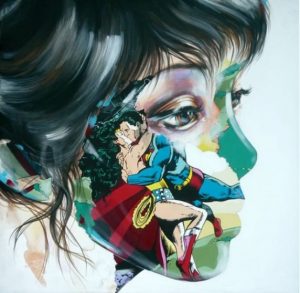 Sandra Chevrier is a canadian contemporary / pop urban artist, known for her captivating portraits of women from The Cages series.

Born in 1983, Chevrier got her Bachelor’s degree in visual and media arts from UQAM – L’Université du Québec à Montréal. As a self-taught artist, Sandra Chevrier first fell in love with art as a kid, to her; Art rapidly became a language on its own. At first, she draw sketches of eyes, all the time.

This initial obsession is highly visible in her present work. Sandra likes to describe herself as a “gaze collector” and her work; a dichotomy or a dance between power and fragility, freedom and captivity, the poison and the cure. Her work is exhibited internationally and her artworks are now in the collections of art collectors all over the world.

Sandra produces work ranging over vastly fluctuating emotional enigmas and concepts that have set the standard of our modern communication, exposing the limitations of our world; our self-imposed expectations and the cages we have allowed to bar us from the fullness of life’s experience.

With work demanding to be dissected beyond its surface value, Chevrier’s portraits are quite literally torn between the fantastical heroics and iconography of comic books and the harsher underlying tragedy of oppressed female identity and the exposed superficial illusion it conveys.

In addition to exhibiting a male-dominated world within her ‘Cages’, Chevrier’s subjects denounce the role given to the female counterpart therein, refusing to play the part of seducer or victim. In the greater body of Chevrier’s work, the images used within the ‘cages’ range from scenes of conflict, triumph and defeat.

They also represent the social limitations, which corrupt what truly is beautiful and lock women into prisons of highly-codified and narrow identities.

By doing so, they are asked to become nothing short of superheroines. Sandra paints masterfully detailed portraiture, making her women seemingly emerge from a surreal world, onto the canvas, wherein a dance is performed between reality and imagination, truth and deception.

The artist chooses to highlight the fragility of the superhero, their struggles and weaknesses, and exposes the humanity within the superhuman.

Despite all the playfulness of the thing itself and all the “CRASH BAM POW,” superheroes are also fragile. We are merely human men and women, and we are entitled to our flaws and errors.