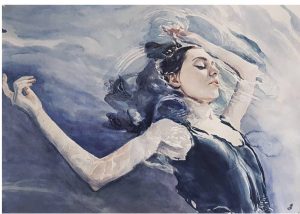 Caitlin Kelly is an award-winning filmmaker and published author.

Her first award-winning film started in 2015 with “Depression” a film made when she was 15 years old. “Depression” went on to win “Best Message” in the Great American No Bull Challenge.

After this, she came out with “What’s inside of a tampon” which became an official selection in 2018 All American High School Film Festival. Aside from filmmaking,

Caitlin Kelly also has three published books with KDP publishing. Her first one is “the words of a madman” and the sequel, “the words i wish i said”; and “the perks of solitude”.

In 2019, she released the drama short film, “Jamey’s Ladder”, this film went on to win the 2019 Peninsula High School Film Festival for Best Drama and Best of Festival.

She also won Best Documentary for “is poetry really dead?” at this festival. In addition, Caitlin has taken up freelance modeling in 2020.

about the words i wish i said

these were not all the words i wish i said.

but if i said the words i wish i did, then they wouldn’t be my little secret, they would be words on paper in a book.

the words i wish i said are between me and my party of a brain. because if you knew the words, then you would have such an advantage over me, and my quiet showers where i ramble on to myself about my words wouldn’t be my secret anymore.