Sirio Tofanari was born in Florence in 1886. After gaining a diploma at the Accademia di Belle Arti he became a self-trained sculptor, spending time studying in both London and Paris.

He made his debut at the Mostra d’Arte Decorativa in Faenza in 1908 at the age of only twenty-two.

In the same year he showed his work at the Promotrice di Belle Arti in Turin, where a member of the royal family purchased one of his works. He showed at the Venice Biennale for the first time in 1909, the Galleria d’Arte Moderna in Florence buying one of his sculptures, and on that occasion he was also noticed by Ugo Ojetti, who was to become one of his most convinced supporters and collectors.

In the course of the 1920s he achieved success both in Italy and in Europe, taking part in numerous exhibitions: the Primaverile Fiorentina in 1922, the Third Rome Biennale in 1925 and the Venice Biennale again in 1934. It is no mere coincidence that his introduction in the Primaverile Fiorentina catalogue highlights his international success: “When in England, he studied the animals at London Zoo and in the Natural History Museum in South Kensington instinctively and with great passion; […] In 1911 Tofanari won the gold medal at the International Exhibition in Barcelona and his award-winning group was purchased for that museum. In San Francisco, Rome, Florence and Turin he won fresh awards; latterly the Galleria d’Arte Italiana in Lima (Peru) wanted two groups by this modest and industrious sculptor who has gained such an intimate understanding of animals’ tricky psychology. His modelling is nervous and determined, above all it is dynamic, achieving its greatest effects with the greatest simplicity of line and with the barest synthesis of planes. Modest, extremely industrious, he works and sells a great deal”.

He moved to Milan in 1937, where he subsequently began to work with the Società Ceramica Italiana di Laveno. He died in Milan in 1969.
_ 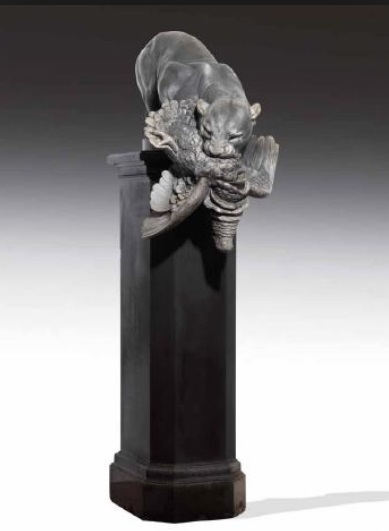