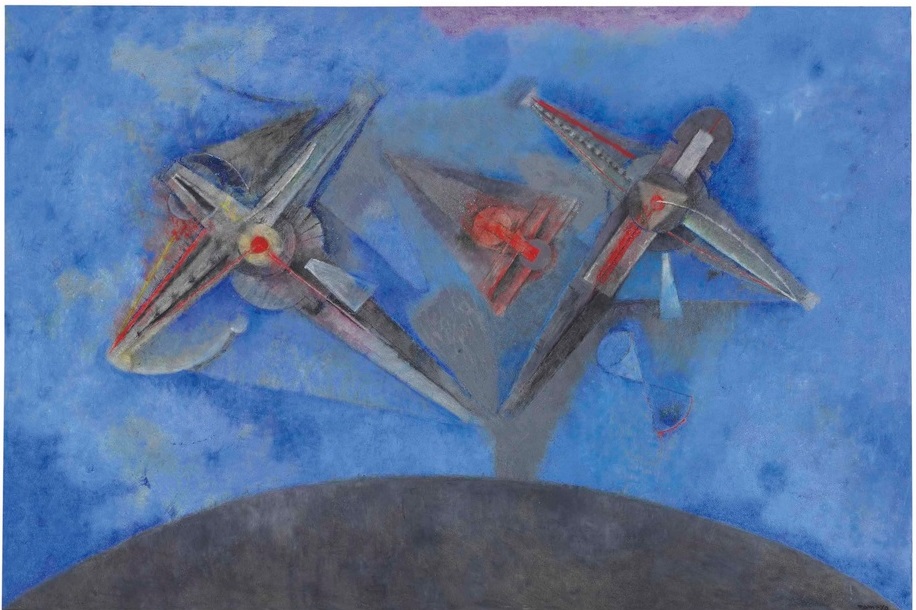 In The Astronauts, Tamayo’s description of outer space is startlingly joyous. His blues are brilliant and jewel-tone, and his spaceships are elegant vehicles that spring symmetrically from the center of the composition mimicking toy airplanes, rather than the rockets that had gone up into the stratosphere since the race for space began in the late 1950s.

His spacecrafts burst onto an azure weightless space in exploration of the unknown. His Earth, by contrast, is a dark mound from which mankind now ventures bravely into worlds beyond. By the time this work was painted in 1971, men had already landed on the Moon two years earlier but the giddiness of journeys to the stars and galaxies, only imagined in popular science fiction novels before, further fueled mankind’s enthrallment with space exploration. It was possible to reach the stars, after all.

The entire world had seen American astronauts land on the Moon and plant a small flag on its craggy surface. Indeed, this event led Tamayo to create a series of works relating to space, including not only the present painting but also the earlier painting Hombre en el espacio (1970) sold at Christie’s Latin American sale in November 2009, is also devoted to the era of scientific investigation of the universe.

Tamayo’s oeuvre engaged the epic, tragic, optimistic, human themes that transcend nationalism and evoke universal ideas. His aesthetic was influenced by the modernist currents he experienced outside his native Mexico and his remarkable use of splendid color to evoke the universal spirit of humanity that links all mankind.  (by Margarita Aguilar)