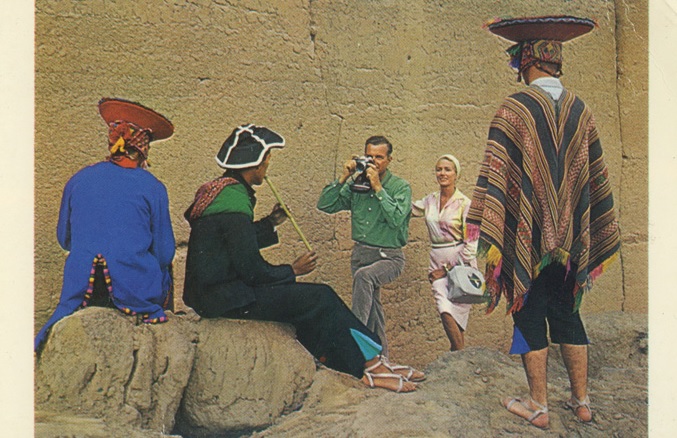 An advertising card from Panagra airline, a joint venture between Pan American Airways (PanAm) and W.R. Grace Co. that served the South American countries of Panama, Colombia, Ecuador, Peru, Bolivia, Chile and Argentina from 1929 to 1967.

Panagra was a joint venture between Pan Am and W.R. Grace Company.

Pan Am was responding to a request to provide service south in to Latin and South America but knew there would be difficulty trying to compete with W.R. Grace who controlled the west coast of South America, through their steamship routes, and were not about to let some outsider into their territory—especially an airline. Juan Trippe knew that unless he could get Grace on board there were be no landing rights given to Pan Am for service into Grace’s territory. Pan Am’s negotiations with Grace culminated in the formation of Pan American-Grace Airways—Panagra—with fifty percent being owned by Grace and fifty percent by Pan Am

Panagra provided air transportation for passengers, mail, and cargo over a 4,251-mile network of routes throughout Panama, Colombia, Ecuador, Peru, Bolivia, Chile and Argentina. Panagra, thus, had accomplished a pioneering job second to none. Less than a year after its inception, it had linked the Americas from the United States to Argentina with a direct, regularly scheduled passenger, mail and freight service. The trip from New York to Buenos Aires by plane could now be made in eleven days which was less than half the time it took by steamer.