Joseph Spence (August 3, 1910 – March 18, 1984) was a Bahamian guitarist and singer. He is well known for his vocalizations and humming while playing the guitar.

Several American musicians, including Taj Mahal, the Grateful Dead, Ry Cooder, Catfish Keith, Woody Mann, and Olu Dara as well as the British guitarist John Renbourn were influenced by and have recorded variations of his arrangements of gospel and Bahamian songs … keep on reading Wikipedia

Spence’s repertoire encompassed calypso, blues, folk music and sacred songs. He played a steel-string acoustic guitar, and nearly all of his recorded songs employ guitar accompaniment in a drop D tuning. The power of his playing derives from moving bass lines and interior voices and a driving beat that he emphasized with foot tapping. To this mix he added blues coloration and calypso rhythms to achieve a unique and easily identifiable sound. He has been called the folk guitarist’s Thelonious Monk. (Wikipedia) 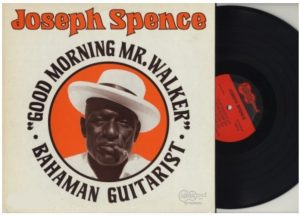 The playing of Bahamian master guitarist Joseph Spence (1910-1984) offers a wonderful example of how one man combined individual inspiration and talent with regional musical traditions to create a seminal guitar style.

The influential Bahaman guitar master Joseph Spence was already in his late forties when folklorists Sam Charters and Ann Danberg Charters recorded him playing to an impromptu audience of friends and neighbors on a porch in Fresh Creek Settlement on the small Bahamian island of Andros in 1958.

The Charters’ meeting with Spence was both fortuitous and coincidental. During the summer of 1958, the Charters were doing fieldwork on the remote and “desperately poor” island of Andros. Sailing from settlement to settlement along the coast on small, locally made fishing sloops, they hoped to find and record traditional Bahamian music that had not been influenced by either tourism or the popular calypso music of neighboring Trinidad. As Sam Charters recalled in his liner notes to Joseph Spence: The Complete Folkways Recordings 1958 (reissued in 1992)