A Boule à neige is a transparent sphere, traditionally made of glass, enclosing a miniaturized scene of some sort, often together with a model of a landscape. The sphere also encloses the water in the globe; the water serves as the medium through which the “snow” falls. To activate the snow, the globe is shaken to churn up the white particles. The globe is then placed back in its position and the flakes fall down slowly through the water. Snow globes sometimes have a built-in music box that plays a song. Some Boule à neige have a design around the outerbase for decoration. 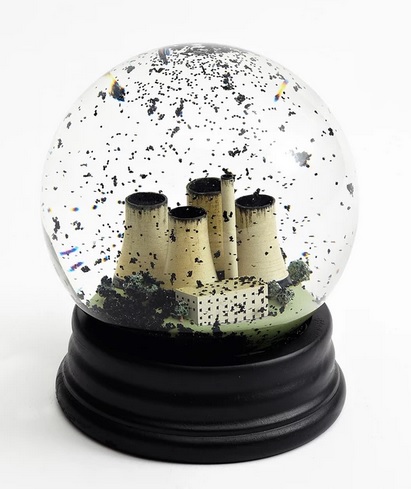 Dorothy, No Globe for Copenhagen, 2009

The single greatest threat to the climate comes from burning coal but despite this more dirty coal-fired power stations are on the verge of being built in the UK (the first for 30 years). The snow globe was designed for Ctrl.Alt.Shift in anticipation of the United Nations Climate Change Conference in Copenhagen 2009.

Ctrl.Alt.Shift is an initiative designed to engage young people in global issues and enact social change through art. Investigating the theme of conflict, this project comprises two distinct exhibitions: work by students on Newcastle University’s LifeWorkArt programme, who have been exploring civil war in Columbia, and new pieces by their mentors, Matthew Stone and Graham Hudson.