Mario Castellanos Gonzalez was born in the village of Arrazola, Oaxaca in 1973.

He is a first generation wood carver who, unlike many, did not learn this tradition from his parents; he began carving at the age of 18 out of economic neccesity, and began learning alongside his younger brother in their cousin’s carving workshop in 1991.

Now after having dedicated 25 years to his craft, Mario is recognized around the world as one of the top wood carvers in Oaxaca. His magic touch, is able to create beautiful and whimsical figures full of an incredible sense of movement, often out of one solid piece of Copal wood.

The sense of movement in a carving is one of the ultimate signs of quality as it is so difficult to properly achieve and Mario is an undeniable master at this technique!

Reina Ramirez, Mario’s wife, has been painting for 28 years.

Her experience is reflected in the precision of her paint designs and the beautiful mixture of colors that she favors.

Mario and Reina are also the parents of three children, Yovany, Ivan and Lizbeth, two of whom help them craft their carvings in the family workshop.

Castellanos was part of the World Forum on Arts and Crafts, as well as demonstrating his techniques at the Kingston High School in New York and a community exchange with San Jose State University of California.  He continues to feel strongly about and participate in reforestation projects and is a member of the community group EcoAlebrijes in Arrazola.

Mario is a representative for the community of artists from Arrazola and San Martin Tilcajete by the name of Tonas de Oaxaca, who are seeking a trademark for their work due to the influx of imitation pieces being produced in countries such as China.

The animal wood carvings that are the couple’s trademark, portray a wonderful sense of movement and curiosity.

Their painting style is at the top of their field and reflects an expert level of shading, using a banded design format often featuring symbolism central to the Zapotec Indian culture of Oaxaca.

Mario and Reina’s pieces are eye catching works of art that are notable both for their actual carving and for their cheerful painted designs.

Castellanos loves to carve all types of animals, constantly experimenting with something new, but his favorite subject continues to be the iguana.  He loves the lizard figures for the degree of difficulty in the curving and coiled tails. He says that the different types of lizards and their differing positions give him goals to achieve in the advancement of his skills and he thoroughly enjoys winding the coiled tails to the best of his ability in different styles.

As a result Mario first became famous for his amazing iguanas, but ALL of his work is artistic, original, well thought out, and full of intricacy. 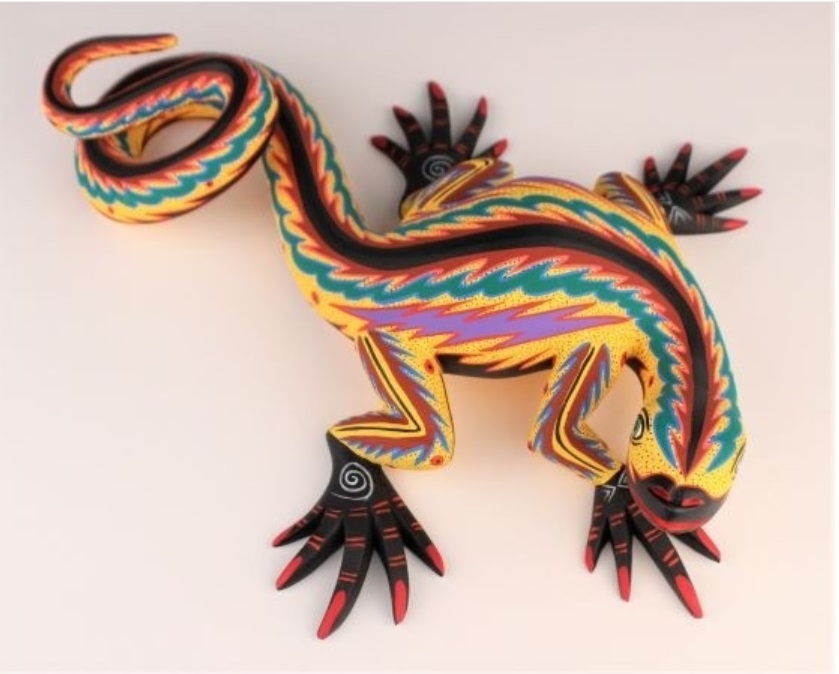 This coiled tail iguana is carved out of the traditional locally sourced Copal Wood.

The intricacy shows the expert skill level of the carver. Then combine it with the beautiful and traditional paint design that is done by Mario’s wife Reina Ramirez.

Mario Castellanos is one of the most incredibly talented and sought after Oaxacan wood carvers out there!