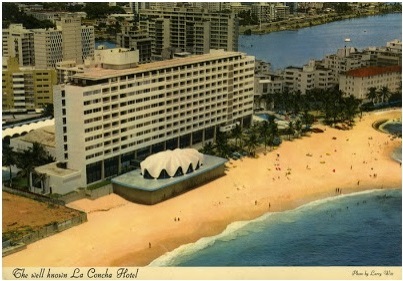 The hotel was first opened in 1958 during the Tropical Modernism Movement. The building was designed by Osvaldo Toro and Miguel Ferrer. Another part of the complex, the seashell-inspired building for the restaurant La Perla, was designed by architect Mario Salvadori.  La Concha Resort incorporates tropical climate features such as cross-ventilation, natural illumination, open lobbies and seamless transitions between inside and outside spaces, with details relevant to Island traditions: an interior patio, visual allusions to traditional galleries with blinds, a mirador encompassing both the sea and the city and the use of water throughout as a leitmotif.
The protective concrete element in the façade, called brise-soleil in French or “quiebrasol” in Spanish, is an architectural element used by famed architect Le Corbusier. The purpose of the “quiebrasol” is to filter the sun’s rays towards the interior corridors.
The hotel reopened in January 2008 after renovation. It is also a part of Marriott’s Renaissance Hotels brand. Since then, it has been known to be one of the most modern and luxurious hotels in Puerto Rico. It is a popular stay for many well-known Hollywood celebrities
cctm.website
cctm cctm cctm cctm cctm cctm cctm cctm cctm cctm