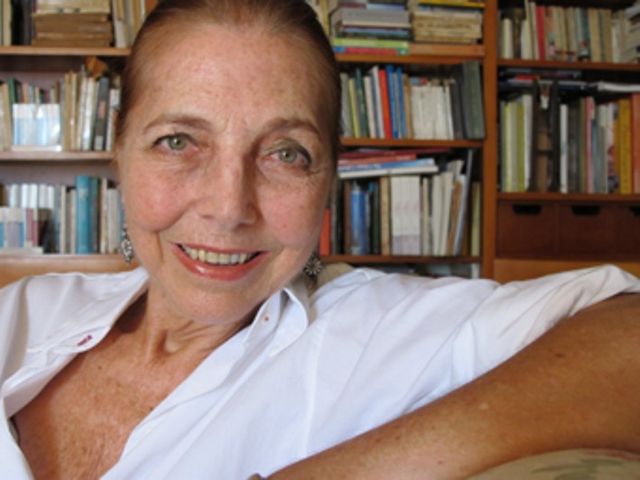 Marina Colasanti was born in Asmara, Eritrea, in 1937 and moved to Italy at the beginning of World War II.

After the war in 1948, her family moved to Rio de Janeiro, Brazil. Even during the war, she had been surrounded by art: fictional stories, a collection of classic tales given to her by her parents as a substitute for friends and toys.

When she later on went to college, Colasanti chose the National School of Fine Arts, specializing in etching. However, she had wide interests and soon turned to journalism, writing for the cultural section of the Brazilian newspaper, Jornal do Brasil. She was active in various magazines and worked in advertising and television as an interviewer and TV host.

In the same period, she also translated the works of other authors such as Jerzy Kosinski and Carlo Collodi.

Colasanti has also been active in defending women’s and children’s rights on an international level and was, in 1985, appointed to a four-year term in the National Women’s Rights Council. Still committed to journalism, in 1991, during the coup d’état against Gorbachev in Moscow, she joined the resistance and reported the events to her newspaper.

Regarding her work as an author, she wrote her first book, Eu Sozinha (I Alone), in 1968 and has since then published more than fifty books covering multiple genres and topics, for both adults and children—her first book for children being Uma Idéia Toda Azul (The Blue Idea, 1978).
Her work in children’s literature is characterized by its poetic language, and in one interview, Colasanti bestowed upon herself the title “manufacturer of metaphors” to describe her passion for creating metaphors and symbols; this passion is particularly evident in her fairy tales. Her protagonists are classic fairy tale characters, her motifs include the quest, and verbal images are ever-present. Colasanti incorporates many themes in her stories, one prominent being loneliness; she derives inspiration from various triggers in her surroundings, such as female laborers in Brazil.

Drawing on her artistic background, she has created many illustrations for her collections of fairy tales. Her work has granted her a number of distinctions, including The Best Fiction for Young People (FNLIJ) in 1979 for Uma Ideia Toda Azul (The Blue Idea) and in 2001 for Breve História de um Pequeno Amor (Short Story of a Tiny Love), as well as a mention in the IBBY Honour List for translation of The Adventures of Pinocchio in 2004.

Leah Andrews, Priscilla, Queen of the Desert, The

This website uses cookies to improve your experience while you navigate through the website. Out of these, the cookies that are categorized as necessary are stored on your browser as they are essential for the working of basic functionalities of the website. We also use third-party cookies that help us analyze and understand how you use this website. These cookies will be stored in your browser only with your consent. You also have the option to opt-out of these cookies. But opting out of some of these cookies may affect your browsing experience.
Necessary Sempre abilitato
Necessary cookies are absolutely essential for the website to function properly. This category only includes cookies that ensures basic functionalities and security features of the website. These cookies do not store any personal information.
Non-necessary
Any cookies that may not be particularly necessary for the website to function and is used specifically to collect user personal data via analytics, ads, other embedded contents are termed as non-necessary cookies. It is mandatory to procure user consent prior to running these cookies on your website.
ACCETTA E SALVA
Next Up